No Result
View All Result

What Do We Mean By ‘disposable Cell Phone’?

Before 2015, where CDMA-based phones came without SIM cards, there was a slight difference, however, these days, most phones available on the market are 4G LTE operable and thus come with a SIM card. As such, it makes way more sense to dispose of a SIM card than the entire phone. We are more and more sustainability-conscious, so we really don’t want to be disposing of phones just like that. Moreover, it seems quite ridiculous to dispose of or burn a working device, doesn’t it?

We the name stuck from the era of CDMA-based phones that had no SIM cards, as explained above.

Even though that bay a definition any prepaid phone is a disposable cell phone, most people still see disposable cell phones as phones that are ultra-cheap and thus you won’t mind breaking or losing that. That said, you should know that disposable cell phones range from free (oftentimes they come for free if you purchase a decent amount of air time) or they can be over $1000 if you go with one of the latest smartphones. In the case of the letter, the last thing you’d want to do is dispose of it.

Who Needs A Disposable Cell Phone?

Now that you know that disposable cell phones are nothing but prepaid phones, you sure understand that there is a wide range of people who may want to use them. 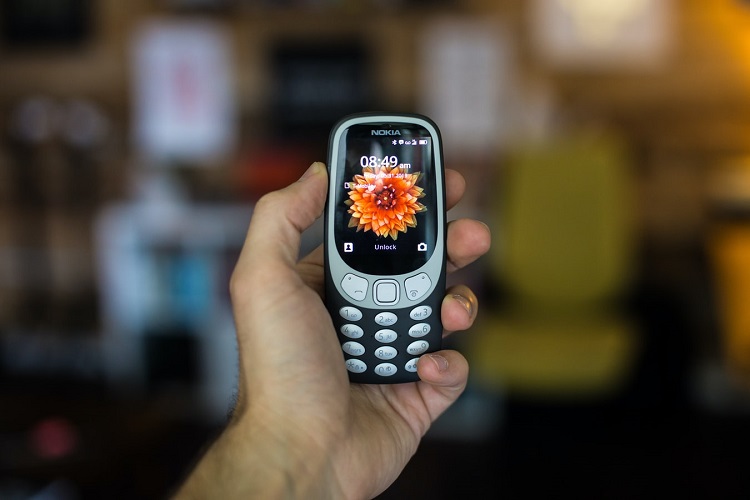 A disposable cell phone is the best option for:

There are probably some additional reasons why you’d want a disposable phone, but the list above covers the main reasons.

Are Disposable Or Burner Phones Illegal?

Of course, burner phones are nothing but prepaid phones, as such, they are 100% legal. They might get a bad reputation due to them being presented as mostly used by criminals, which do in fact mostly stick to prepaid phones, however, keep in mind that criminals also use all sorts of other objects and services that are intended for everyday use for all people.

That said, you can completely legally purchase and use a disposable cell phone.

How Do Disposable Cell Phones Work?

Disposable phones work on the same principles as contract-based phones. They are either CDMA or GSM based phones, which now makes very little difference since both types of networks operate using SIM cards (all 4G LTE devices have SIM cards). Even though that 3G phones are slowly being put out of use as the 3G networks are in the process of shutting down, there is still a way to buy CDMA 3G-based phones that do not have SIM cards.

All disposable phones work based on airtime. This means that you add credit to your disposable phone, which is then used for calls, text, and mobile data. Air time can be added on automated bases as well. So as long as your disposable phone is charged with airtime you can use it to send texts and make calls. However, if your airtime runs out, you can only receive messages and calls, and make emergency calls (those are free basically all across the globe).

The thing to keep in mind is also whether you want your prepaid phone to be unlocked or not. Many prepaid phones offered by certain carriers come locked to their network and can be (officially) unlocked only after a certain period has passed (often 12 months). If you want an unlocked device, you need to consider that at the time of purchase.

A great alternative for unlocked disposable cell phone models are used or refurbished devices, which you may use with SIM kit from any compatible carrier that offers prepaid plans.

Despite the fact that we mentioned above that even the latest smartphone comes in the form of prepaid devices and are as such disposable cell phones by definition, we decided to stick to more common disposable cell phone models options. As such, you can find below 6 best burner phones, of which the first 4 mainly focus on the simplicity of calls and texts, and the last 2 offer smartphone benefits.

The Nokia 3310 was one of the iconic phones of the era of now know regular phones (back then, they were just phones). They resurrected it back in 2017, though it doesn’t look exactly like the original. It has a larger 2.4-inch color screen and a 2-megapixel rear camera. The phone does come with the Nokia favorite game, Snake.

The Nokia 3310 3G comes with the Opera browser, which you might want to use for some emergency info gathering. However, keep in mind that plenty of websites won’t work on this WAP-based browser.

Other Nokia 3310 benefits include a microSD slot that may store up to 32GB of music storage, a nice-n-loud speaker and FM radio. The camera is, of course, very basic and poor, which is normal for this kind of cheap disposable phones. Though, keep in mind that this is one of rare “burner” phones (cheap and basic prepaid models) you could call desirable or interesting, mostly due to the nostalgia it evokes.

The ZTE Z233 4G LTE is a flip phone, which means it provides you with a perfect combination of compactness and simplicity. It lets you answer and end calls by simply opening or closing the two halves of the phone. It operates on a 4G LTE network, which means that you can even browse the web at relatively fast speed.

The Alcatel MYFLIP is another flip phone that offers maximum simplicity. It is a very basic phone, with a large display and large keys. It is great for texting and quick calls. It enables users to get back to basics with this wireless flip phone. The functional clamshell design includes a bright 2.4-inch QVGA screen that shows only what you need. This Alcatel MYFLIP wireless flip phone has a 2MP camera for photos and includes music and video players for portable entertainment options.

The Nokia 8110 is another nostalgic Nokia’s model, famous (the original version from 1996) by its part in The Matrix. Thanks to its curved shape it is also known as the “banana phone”. The phone is elongated when the call mic is flicked out. 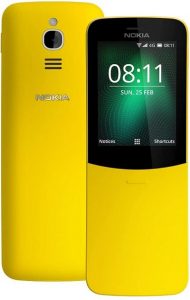 The Nokia 8110 is a 4G phone that has GPS, Wi-Fi and Bluetooth 4.1, and baked-in email and Google Maps support. It uses KaiOS rather than Android. App support is still very limited and the apps you do get feel quite clumsy and slow. The Nokia 8110 is somewhere in between a basic phone and a smartphone.

The Cubot J3 does let you do an awful lot more than basic phones and flip phones. You can play thousands of more games and use core Android features like Google Play, Gmail, and Maps, which can be extremely entertaining and useful. 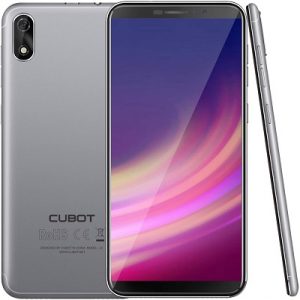 The Cubot J3 has 1GB, nowhere near enough for a satisfying experience with full-fat Android, thus it uses Android Go, a cut-down version of the system designed for low-power processors.

The Cubot J3 has an 18:9 aspect screen for video viewing. Don’t expect too much from its camera quality. The Cubot J3 has a 5-inch 950 x 540-pixel display – it uses a twisted nematic style display, which looks flat-out bad at some angles.

Moto G7 is one of the most affordable and reliable smartphones. Though its single speaker doesn’t offer the greatest sound, and it takes mediocre low-light photos and video (compared to the best smartphones on the market), the G7 has dual rear cameras, an enduring battery, and a sleek, and good-looking design. It also charges relatively quickly, which is useful when you need to juice up while on the go.

Where To Buy Disposable Phones?

Below is a list of some of the best places to turn to for disposable cell phone models.

TrachPhone – TracFone Wireless is a reputable prepaid-focused carrier that sells a variety of prepaid phones. Those phones can be activated without service contracts. TracFone offers various plans and airtime deals to best match your needs. They offer flip phones and also smartphones, which you may use as disposable phones. You can shop directly with TracFone or turn to Walmart, Amazon, Best Buy, or other alternatives.

AT&T Prepaid – AT&T is one of the leading wireless providers and mainly focuses on contract-based services. However, they do offer a relatively wide range of phones that are available with their prepaid options. In addition, they offer you to bring your own phone and use it with their Bring Your Own Phone (BYOP) option.

Verizon Prepaid – Verizon is the best USA carrier and it also offers prepaid plans. With that plan, you can get an affordable unlocked phone, which can also serve as prepaid cell phones. Check out more about Verizon Compatible Unlocked Phones

Metro by T-Mobile – this is another highly popular contract-free wireless provider. You can visit their shop online or locate one of their local store, where you can get special deals. In some cases, they even offer free phones. Check out more about T-Mobile Compatible Phone

There are many other reputable carriers that offer prepaid plans, which you may use as disposable cell phones. As mentioned above, there are places where you can get unlocked phones and carrier-based phones. These include Amazon, Best Buy, Walmart, eBay, just to name the most popular one.

The Advantages of a Disposable Cell Phone

The main advantages of disposable cell phones are:

The Disadvantage of a Disposable Cell Phone

The main disadvantages of disposable cell phones are:

Is a Disposable Cell Phone Traceable?

If you want to ensure that your number is not traceable, you will probably want to change your SIM cards on a regular basis. For smartphones, there is an alternative – the ‘Burner’ app, which lets you create and manage phone numbers for maximum privacy.

Are All Prepaid Phones Disposable Or Burner Phones?

This question is related to the definition of disposable phones. Some definitions don’t see any difference between the prepaid phones and disposable cell phone models, while others do. The way we see it, you can get rid of or burn any prepaid phone at any time. And as long as you didn’t need to connect the phone to your name with any contract, you are on the same track as with any burner phone.

However, the main difference often lies in the time needed for a number to be placed back into the circulation for use after the phone is “burned”. True disposable phones have this recirculation done very quickly, which means that if your do not charge your phone for a long period, the number will be put out of use and will be available for next disposable phones.

Why You Might Want To Own A ‘burner Phone’ Or A Disposable Phone?

The main reason for people to want a burner phone lies in budget, privacy, and simplicity. The level of all these qualities will greatly depend on the exact phone model and carrier you decide to choose.

How to Get Free Tablet for Low Income Families

How To Get Free Government iPhone 2023

How to Get Free Government Tablet Assurance wireless 2023

Switch To Cricket And Get A Free Phone 2023

How to Get Free 5G Government Phones With Free Internet 2023

How to Get Free Government Phones By State in 2023

No Result
View All Result